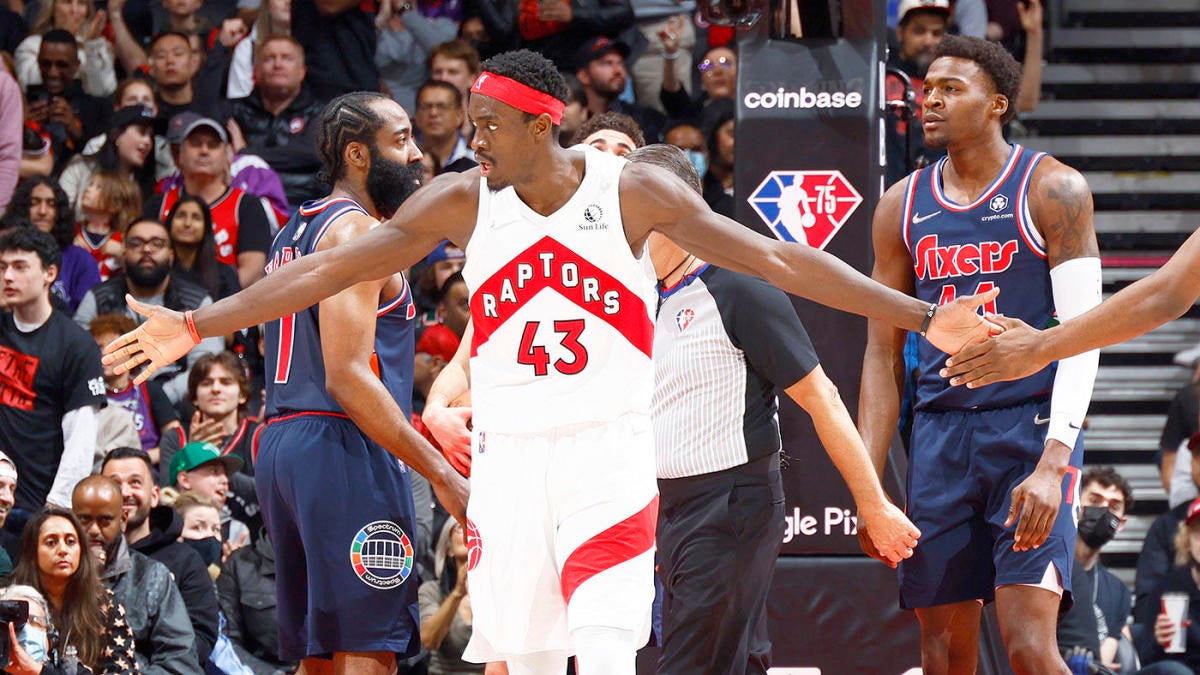 The Toronto Raptors were able to extend their season with a 110-102 victory over the Philadelphia 76ers in Game 4 on Saturday afternoon. After winning the first three games of the series, the Sixers were unable to complete the sweep, and thus the series will now return to Philadelphia for Game 5 on Monday night. Pascal Siakam led the way for the Raptors with a playoff career-high 34 points, while Gary Trent Jr. added 24 points for Toronto. James Harden paced the Sixers with 22 points, and MVP finalist Joel Embiid added 21 points for Philadelphia.

Facing elimination, Toronto was the more motivated team, and that became evident early on. The Raptors forced 16 Philadelphia turnovers and scored 21 fast-break points as a result. They also outrebounded the Sixers (46 to 41) and scored more points in the paint (42 to 38). The Sixers are the more talented team, but that doesn’t mean that they’ll be able to coast to playoff victories without giving maximum effort, and that’s a lesson they learned the hard way on Saturday.

With Game 5 just two days away, neither team has much time to dwell on their performance. But, before moving ahead in the series, here’s a look at four key takeaways from Toronto’s Game 4 victory.

Thanks for signing up!

Keep an eye on your inbox.

There was an error processing your subscription.

Pascal Siakam had played in 50 playoff games heading into Game 4, but he saved his most productive postseason performance for when Toronto needed it the most. With the Raptors’ season hanging in the balance, Siakam went out and dropped a playoff career-high 34 points on the Sixers. Those 34 points were more than he had scored in the previous two games combined.

Siakam’s production came efficiently, too, as he shot over 50 percent from the field (10 of 19) and knocked down 13 of his 15 free throw attempts. He also added eight rebounds, five assists, two blocks and a steal in his 44 minutes of action.

In a game that also included the likes of Joel Embiid and James Harden, Siakam was the best player on the floor on Saturday afternoon, as he was seemingly able to deliver every time the Raptors needed him to. He obviously didn’t do it alone, but Siakam is a huge part of the reason why Toronto’s season isn’t over right now.

Over the course of the contest, it became pretty clear that Embiid’s right thumb was bothering him as he was seen grabbing at it and grimacing several times throughout the game. The big man is feared to have torn ligaments in the thumb, and will undergo an MRI Sunday. In the meantime, Embiid has vowed to play through the pain. He had the thumb heavily taped up on Saturday.

Coincidentally, Embiid had his worst game of the series in Game 4, as he scored 21 points on 7-of-16 shooting from the floor and secured just eight rebounds. He also turned the ball over five times. It’s fair to wonder how much discomfort caused by the thumb contributed to his relatively poor performance. While Embiid might downplay the injury to media members, it’s clear that it was an issue in Game 4, and thus it’s fair to wonder how much impact it will have moving forward.

3. Toronto gets a Young boost

During the first three games of the series, Thaddeus Young was largely a non-factor. He played a total of 20 minutes and scored a total of four points during those games. He also failed to record a single assist. It was a different story in Game 4, though, as Young played a major role for Toronto off the bench.

In his 30 minutes of action (10 more minutes than he played in the first three games combined), Young found a plethora of ways to contribute. He scored 13 points, grabbed five rebounds, dished out five assists, snagged three steals and blocked a shot. He also added a major highlight by scoring an impressive basket over Embiid toward the end of the first quarter.

Overall, Young provided a big boost for Toronto, and was a big part of the reason they were able to extend the series. Given the way he played in Game 4, we’re likely to see Young have more of an expanded role in the coming game(s).

Fred VanVleet played just 15 minutes in Game 4 as he exited in the first half and never returned. He was ultimately ruled out for the rest of the game due to a left hip strain. He finished with five points, three assists and two rebounds, and will have further imaging done on the hip to determine the severity of the injury. The Raptors were able to take care of business without VanVleet in Game 4, but his status moving forward will obviously be something to keep an eye on, as he has been an integral part of Toronto’s success this season.