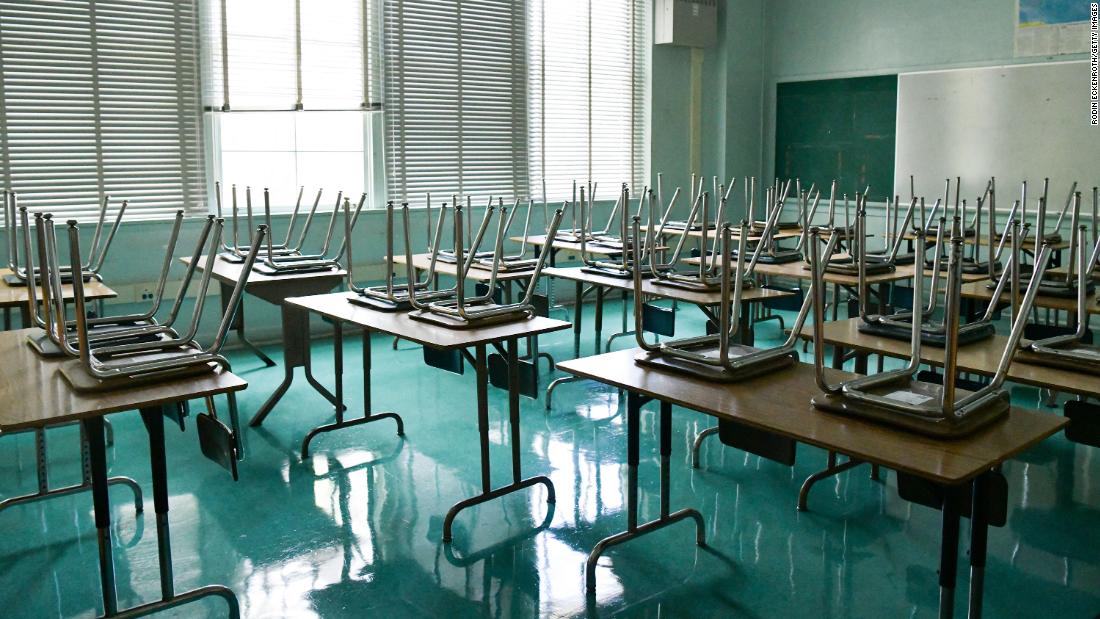 In contrast, there was a parallel pandemic where kids attended fully functioning private schools, in person. In many red states and rural areas, public schools reopened in the fall of 2020. Europe and much of the developed world sent kids back to school almost immediately after initial Covid-19 shutdowns with minimal restrictions.
While there was understandable fear for the safety of students and teachers alike when the pandemic began, data quickly showed that schools could reopen safely, and many did, even in a pre-vaccine world. Early findings were then bolstered by further studies throughout the 2020-21 school year.
Returning teachers and administrators certainly faced risks. They worried for their students, themselves and their own families. But as the school year progressed, the high costs of virtual school led some public-health officials to change their tune on the risk calculus, suggesting that in the time of vaccines and other mitigations, “teachers need to accept, as other essential workers have, that returning to school will entail some risk.”

Often, Democratic politicians, health and school officials, and teachers unions in some of America’s bluest cities and suburbs aligned perfectly in a mission to keep school doors closed for so long. In these places, in-person instruction was deemed nonessential by the very people who claim to fight for public-school education.

The high academic and social costs of remote learning and closed schools are now indisputable, but there was also a political cost. Republican Gov. Glenn Youngkin of Virginia capitalized on it by appealing to frustrated parents in 2021. He won an underdog race in this increasingly blue battleground state, the first statewide win for the GOP in more than a decade, on the strength of improved suburban performance combined with rural base turnout.
His opponent former Democratic Gov. Terry McAuliffe’s defining gaffe — “I don’t think parents should be telling schools what they should teach” — solidified his party’s image as aligned with school boards and teachers unions, as did his decision to have American Federation of Teachers head Randi Weingarten stump for him at the close of the race.
After that loss, and a squeaker for Democrats in a New Jersey governor’s race animated by many of the same issues, the landscape changed. The American Academy of Pediatrics concluded that for the 2021-22 school year, the risks of closing schools outweighed opening them — even in the face of more contagious variants like Delta and Omicron. But the political damage remains for Democrats, who had become the face of school-closure policy.
Is it any wonder, then, that in a recent NPR-PBS-Marist poll of parents, 60% of parents with children under 18 favored the Republican Party headed into midterm elections? Education has been a perennial strength for Democrats. A longtime 15 to 20 point lead on the issue has dwindled to single digits, with Republicans occasionally leading. The change reflects what Democrats first saw in Virginia, where McAuliffe lost a 33-point lead among voters who prioritized education over less than two months.

Much of blue America, which kept schools remote or hybrid for the 2020-2021 school year, conducted an unprecedented “social experiment” on children, resorting to lengthy school closures for millions of children — a tactic not used during other national emergencies or previous pandemics.

Now, the results are in from the “social experiment” and they are very, very bad, and the people who supported closures are finally ready to talk about it.
“Remote learning was a failure,” wrote David Leonhardt of The New York Times, describing the consensus of researchers and the findings of a new study out of Harvard’s Center for Education Policy Research, which compared pre-pandemic scores on a particular national test (MAP) in 49 states and Washington, DC, to pandemic-era scores in high- and low-income districts, in-person, hybrid and virtual learning.
“The main effects of hybrid and remote instruction are negative, implying that even at low-poverty (high income) schools, students fell behind growth expectations when their schools went remote or hybrid,” the study authors write. But they fared better than students already at a disadvantage.
Students at high poverty schools “were more likely to go remote and they suffered larger declines when they did so,” according to the study.
Economist Thomas Kane, an author of the study, told the Harvard Gazette, “In high-poverty schools that were remote for more than half of 2021, the loss was about half of a school year’s worth of typical achievement growth.”
This wasn’t hard to imagine, and it’s just the barest indication of the crisis. Learning loss over summer breaks had been a well-known phenomenon for years before the pandemic, and The New York Times editorialized in April 2020 that losses from closures of “weeks or months because of the coronavirus pandemic could well be catastrophic by comparison.” They were right back then, and closed districts compounded the problem for 12 months, sometimes more.

This isn’t a small number of students, either.

According to Burbio, an aggregator of school and government data, which tracked which schools were open and closed throughout the pandemic, 13% of America’s schoolkids were still fully remote in April of 2021. That’s over 6 million students out for more than a year. Tens of millions more than that were on Zoom school for less time, but still significant portions of a year, while their parents fought to drag recalcitrant school districts back into the classroom.
Despite The Times’ early warnings, it soon became very unpopular in left-leaning areas to argue for school openings. In Northern Virginia, a school board member asked parents if they wanted their kids “to be alive or to be educated?” In the Bay Area, a school board member disparaged parents for “want[ing] their babysitters back.”
To be as cautious as possible about Covid-19 was considered good and liberal while the idea of opening school was Trumpian wrong speak, particularly after then-President Donald Trump declared in July 2020 his determination to push governors to open schools.
It became perceived as a project of selfish White supremacists and people who desired to sacrifice children. I am not overstating the rhetoric in these areas, where a mix of political conformity, social pressure and exaggeration of risk of Covid-19 to children created a fear spiral and bureaucratic inertia that has lost schools more than 1 million enrollees and counting.
Education Secretary Miguel Cardona responded to this new Harvard study by entirely missing the point: “This study rightly quantifies & highlights something that every parent, caregiver, and educator has seen over the last two years — that the pandemic had a tremendous impact on our children.”

No, the study shows it was not “the pandemic,” but bad pandemic decision-making that hurt kids, with almost no gains to show for it.

Long-term school closures weren’t just an educational disaster, but a mental-health disaster, as Weingarten of the American Federation of Teachers noted recently.

“Our kids are in crisis,” Weingarten said. “And we had a mental health crisis before Covid … but for two years of disruption, two years of looking at the screens, two years of not having a normal kind of routine and rhythm. Recovery is really tough.”
They are in crisis, a crisis exacerbated by Weingarten herself, whose union allegedly had extensive influence over reopening guidelines written by the US Centers for Disease Control and Prevention, according to emails reportedly uncovered by Republicans on the House Select Subcommittee on the Coronavirus Crisis and FOIA requests. Weingarten says the access was just for collaboration, not lobbying.
Yet she tweeted in the last week that 47% of families didn’t feel their kids’ education was disrupted due to Covid-19, while linking to the results of a national NPR-Ipsos poll conducted last month. This alleged triumph of American schooling leaves a solid majority on the other side, which is a problem for Democrats.

It was a long-cultivated brand of school funding and alignment with teachers unions that earned Democrats’ trust on the issue of education. It was pandemic school closings, and the unions’ backing thereof, that lost it. Ignoring parent concerns or pretending they’re solely driven by prejudice and partisanship will not earn it back.

Until Democrats and teachers unions can at least admit that, they can’t hope to fix the problems they’ve caused in the classroom or at the ballot box.