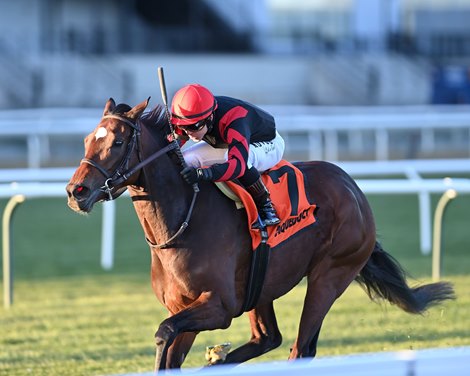 Part of a three-pronged entry from the barn of trainer Christophe Clement, race favorite Mutamakina  reeled in longshot leader Candy Flower  in the waning strides of the $400,000 Long Island Stakes (G3T) Nov. 27 at Aqueduct Racetrack to give her back-to-back victories in the turf marathon.

Run at 1 1/2 miles for fillies and mares 3-years-old and up, the Long Island gave the formerly French-based Mutamakina her first victory on U.S. soil in 2020, and the daughter of Nathaniel  parlayed that into a strong 5-year-old campaign in 2021, which saw her win the E. P. Taylor Stakes (G1T) last out at Woodbine over stablemate La Dragontea , who followed her to the Long Island.

Information provided by Equibase at time of entry.

Clement’s starting trio on Saturday was completed by Sorrel , who last ran March 27 at Gulfstream Park in the Orchid Stakes (G1T) behind grade 1 winner War Like Goddess .

Given the result of the E. P. Taylor, which Mutamakina took by a neck over La Dragontea Oct. 17, the former was sent off as the 2-1 favorite over her barnmate at 5-2, but early on it appeared that her popularity might be unfounded as she found herself well off the pace beneath Dylan Davis, an atypical spot for her given her frontrunning style.

Instead, it was Candy Flower who took up the mantle on the lead, rattling off sensible fractions of :24.20, :50.02, and 1:15 while Sorrel stayed in close attendance in second.

Positions remained unchanged for much of the running, and after barreling around the last of three turns, Candy Flower opened up a decisive advantage. By midstretch she looked destined to cruise home to victory, but Mutamakina emerged from the pack and came charging after the loose leader, needing nearly every inch of the Aqueduct stretch to run down the pacesetter by a half-length.

“She ran a phenomenal race,” said Davis. “A touch quick for her, but she was able to settle in and I was happy with where I was at saving all the ground.

“I thought it was going to move along a little bit more in front of me. It was a little tight there at the corner, but I was able to get her a clear spot and comfortable. Once I got into her, I knew it might have been a touch close but I knew she was going to get there. She was really determined.”

“Dylan has been training her every week and has done a great job,” said Clement. “She’s an important horse for him since she gave him his first grade 1 win in the E. P. Taylor. She’s important for us. When they win at this level, they’re all important.

“She had a really good year. The E. P. Taylor and the Long Island are both important races. I know it’s a grade 3, but it should be a grade 2. This will be her last race and she’ll go back to Ireland and become a broodmare. She’s a very exciting broodmare prospect.”

Candy Flower settled for second, 2 1/4 lengths ahead of La Dragontea in third.

Agent Shawn Dugan purchased Mutamakina out of Book 2 of the 2017 Tattersalls October Yearling Sale for 100,000 guineas (US$137,225) from the New England Stud consignment. The grade 1 winner was bred by Widgham Stud in Great Britain out of the Danehill  mare Joshua’s Princess , the dam of seven winners from as many starters. She has 3-year-old full sister named Flash Flossy and a 2-year-old full brother named Just Josh, neither of which have started, and Joshua’s Princess foaled a Camelot  colt this year.

Arrest Me Red Speeds to Victory

Lael Stable’s homebred Arrest Me Red  made every pole a winning one, staving off an inside rally from Pulsate  to prevail in Saturday’s $150,000 Aqueduct Turf Sprint Championship Stakes.

Trained by Wesley Ward, Arrest Me Red was scratched from the Breeders’ Cup Turf Sprint (G1T) Nov. 6 at Del Mar, which was won by his stablemate Golden Pal . Re-routed to Aqueduct, the 3-year-old son of Pioneerof the Nile turned back older company with a game display in the six-furlong outer turf test.

“He did great. He ran very, very professional,” Ward said. “I just feel bad that he had a minor foot issue, otherwise he would have had a good run in the Breeders’ Cup.”

Arrest Me Red, with Paco Lopez up, marked off splits of :22.69 and :45.60. He opened up a one-length lead at the stretch call and kicked for home with a ground-saving Pulsate  trying to surge up the rail. Lopez kept to task aboard Arrest Me Red and the bay held on for a neck win in a final time of 1:09.43. Pulsate completed the exacta by 1 3/4 lengths over the late-running Chewing Gum . The winner paid $6.50.

Bred in Kentucky, Arrest Me Red improved his record to five wins from seven starts with earnings of $343,800. He is out of the Medaglia d’Oro   mare Maraschino Red , also dam of stakes winner Hidden Treat . The mare’s latest foal is a City of Light   yearling colt. She was bred to Honor A. P.   for 2022.

Trained by Chad Brown, Miles D settled comfortably in third position as Speaker’s Corner set splits of :24.32 and 49.15 on the fast main track. Speaker’s Corner was traveling well in hand at the quarter pole but Miles D was tipped outside and continued to bear down on the leader. Franco switched his stick inside the final sixteenth and Miles D responded to the left-handed encouragement to secure a half-length win over Speaker’s Corner, who was drifting out late in the lane. Vindictive  was third.

Brown indicated the Curlin   colt, who was third in the Runhappy Travers Stakes (G1) in August, could target the $20 million Saudi Cup (G1) in February.

“You got a lot of money in the Middle East so I want to see who’s running in there,” Brown said. “I normally don’t go over for those races but if I have the right horse I will. Especially for $20 million.

“I always thought he was a solid mile and an eighth to a mile and a quarter horse. He got started late and wasn’t able to get on the Derby trail and such, but it is what it is. He’s bred to get better and I’m appreciative of the win today. It’ll be time to face older horses after the first of the year.”

River Bend Farm bred Miles D in Kentucky. The colt is the first foal out of the Bernardini   mare Sound the Trumpets , who dropped a Medaglia d’Oro colt this year and was bred to Into Mischief   for 2022. Sound the Trumpets is out of multiple grade 1 winner My Flag , who is out of champion Personal Ensign and is a half sister to champion Storm Flag Flying .