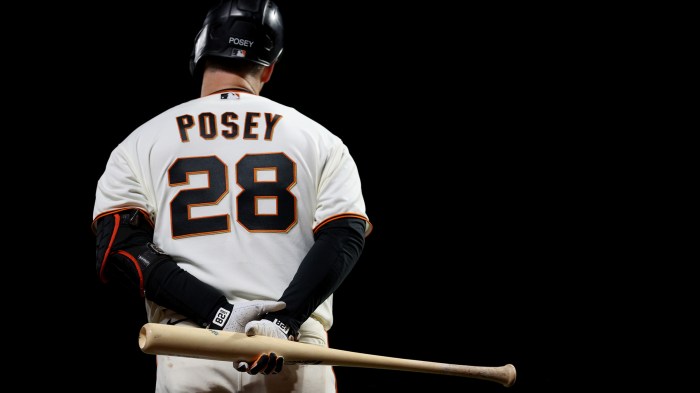 When longtime San Francisco Giants catcher Buster Posey announced his retirement on Thursday, it marked the end of the line for one of baseball’s most unassuming great players — and a stunning end at that. After missing the 2020 season, Posey had just put the finishing touches on a terrific comeback by helping to lead the Giants to the winningest season in the franchise’s long and storied history. But rather than returning for an encore, the 34-year-old decided to hang up the cleats to spend time with his wife and four children, capping off a career that packed a lot of Hall of Fame-worthy brilliance into a short period of time.

Throughout his career, Posey had a tendency to fly under the radar relative to the other great players in the game. Perhaps that was the nature of being a catcher — one of the most thankless roles in all of sports — and perhaps it was because much of what Posey brought to the Giants involved less-visible traits, such as consistency and a solid all-around skill set. At the plate, Posey never hit more than 24 home runs in a season and cracked a .900 OPS only once (in his MVP year of 2012), but he was at least 8 percent better than an average hitter in all but one full season of his career, according to OPS+, finishing with a career batting average, on-base percentage, slugging percentage and OPS at least 10 percent better than league average. Only seven other qualified catchers in MLB history can put the same note on their offensive resume.

And on defense, Posey was perennially one of the best in baseball behind the plate. While his career rate of gunning down would-be base stealers (33 percent) was only slightly better than the average for the post-strike era (29 percent), Posey was better at the less-flashy parts of the catching craft. Among the 299 catchers to log at least 500 innings since 1995, Posey ranks sixth in fewest passed balls per nine innings. And his ability to frame strikes on the edges of the plate was probably his most valuable skill of all. According to FanGraphs, only six other catchers added more total pitch-framing value than Posey, whose framing alone was worth 129 more runs (or roughly 13 wins) than an average catcher. It was no coincidence that Giants pitchers carried an ERA 10 percent better than average with Posey behind the plate, stealing all of those extra strike calls.

It was also no coincidence that Posey led the way for the Giants to build their unconventional dynasty of the early-to-mid-2010s. Using Bill James’s Dynasty Score system, we define San Francisco’s run as extending from 2010 (the first of the team’s three World Series wins in the decade) through 2016 (the team’s last playoff appearance before this year’s out-of-nowhere run). Over that span, no player on the team added more wins above replacement (using the Baseball-Reference.com version) than Posey did:

Much like their best player, those Giants teams didn’t always get the respect they deserved from pundits and prognosticators. The 2010 Giants were 10-to-1 to win the World Series even after Posey’s 3.9 WAR helped lead them to 92 wins and a division title. (They won anyway.) The 94-win Giants of 2012 were 7½-to-1 to win it all going into the playoffs, in spite of Posey’s 7.6-WAR MVP season. (They won anyway.) And the 2014 Giants were 14-to-1 to win the World Series on the eve of the postseason, despite their winning track record and another strong 5.1-WAR season from their catcher. (You can probably guess what they ended up doing anyway.) Beating the odds in October again and again, San Francisco became just the ninth franchise ever to win three championships in a five-year span, and Posey was in the middle of it all.

He was also at the forefront of the most recent — and maybe the most improbable — chapter of the Giants’ run. After Posey spent 2020 away from baseball during its abbreviated COVID-19 season, it was unclear how much he would be able to bring to the Giants in 2021. But he responded with a vintage Posey season: a .304 average, 18 home runs and a .889 OPS, the second-highest of his career. As ever, his Giants followed Posey’s lead: Given only a 9 percent shot at making the playoffs in FiveThirtyEight’s preseason forecast, they proceeded to win 107 games — the best record that season. Posey contributed to more than a few of those wins: His 3.5 WAR ranked second among Giants position players (behind only the similarly resurgent 34-year-old Brandon Crawford) and fifth on the entire team (behind three pitchers he caught).

And then, shockingly, he hung up his spikes. It’s virtually unprecedented for a baseball player to retire when he’s still as young and talented as Posey is: No position player under age 35 has walked away from the game immediately after posting a season of 3.5 WAR or better since Roy Cullenbine in 1947. As it is, Posey’s 2021 will go down as one of the most valuable final seasons in modern history. Since 1960, only two position players have retired after posting higher WARs: Will Clark (4.0) and David Ortiz (5.2). Not even fellow Giants legend Barry Bonds, who accrued 3.4 WAR in his final season, could match what Posey did.

Add it all up and Posey has compiled an impressive resume that will likely land him in the Baseball Hall of Fame. His 44.9 WAR ranks him 16th of all time among players who accrued most of their value at catcher. That’s ahead of six Hall of Fame catchers (not counting those who played their entire careers in the Negro Leagues, whose stats are often incomplete). Admittedly, Posey is shy of the average WAR for non-Negro League Hall of Fame catchers (53.8) — but that is partly a function of Posey’s short career. All but one of the non-Negro League Hall of Fame catchers played at least 16 seasons; Posey will end up playing only 12 seasons, and in one of those, he was a September callup who took only 17 plate appearances.

As demonstrated by his stellar final season, Posey likely could have accumulated more value if he had wanted to. The projection system ZiPS thinks he would have been good for 6.4 more WAR over the next four years. But longevity isn’t everything, especially when you consider that Posey played at a Hall of Fame level throughout his peak: His seven best seasons were worth a combined 36.6 WAR, which ranks 10th among all catchers and exceeds the average for non-Negro League Hall of Famers (34.8).

And if you subscribe to the idea that the Hall of Fame should enshrine the best players of every era, Posey checks that box too. Since the start of the 2010 season, Posey has been the ninth-most-valuable position player in baseball, according to Baseball-Reference.com’s WAR — and by far the most valuable catcher (he leads Yadier Molina 45.0 to 33.9). And if you use FanGraphs WAR, which incorporates Posey’s pitch-framing skills, his 57.8 WAR ranks second among all position players over that time period; only the incomparable Mike Trout beats him out.

Posey’s short career may give some Hall of Fame voters pause when he first appears on ballots in 2027. He scores only a 79 on James’s Hall of Fame Monitor statistic, which measures the likelihood that a player will be elected (a score of 100 is considered having a good chance). And he accrued only 1,500 hits; a position player with fewer than 2,000 hits in the expansion era has yet to make the Hall. But Posey has plenty of traditionalist arguments for the old-school voters who might care about such things: his seven All-Star appearances, MVP award, batting title, Gold Glove … and, oh yeah, three World Series rings.

Like any great performer, Posey knew to leave baseball fans wanting more. The last memory of his career will always be his outstanding 2021 season, leading the Giants to MLB’s best regular-season record in a fitting farewell to one of the best players of his generation.